Prof. Jain has been at the forefront of Nuclear Structure Physics in India for the last 40 years, having contributed to a variety of areas and topics. He has published more than 100 papers in top rated journals including two extensive studies in the prestigious journal, Reviews of Modern Physics, which has an impact factor in the range of 30-40.

During his long career, he has also visited and worked at the Florida State University, McMaster University, Kuwait University and Yangon University as a Research Associate/Visiting Professor.

He is a member/Chair of several national and international committees. He was awarded “Star Performer” in teaching and research by IIT Roorkee in 2004. He was awarded Acharya Sumatisagar Smriti Award in 2009 for his work on English translation of Jain canons. He was honored with Outstanding Service Award by Indian Nuclear Society (Dept. of Atomic Energy) in 2013. 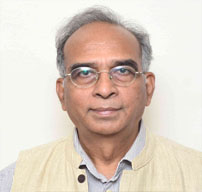